For the past three weeks, we have been stationary at a Marine Corps Logistics Base located in Barstow, CA. When we first arrived to the town of Barstow, my husband instantly looked at me and said “I am so sorry for bringing you here.” The streets were littered with garbage and neglected houses and buildings. Every block had at least one homeless person pushing a cart or holding up a sign. It seemed as though Barstow had been forgotten a long time ago. The town was dirty, run down and not on the safe side.

Dan had a contact job working out of Fort Irwin, an Army base located in the middle of nowhere about an hour outside of Barstow. It was four days on, three days off for three weeks, although there were quite a few days when the weather didn’t cooperate so he didn’t have to report. While we were not excited to be in Barstow, we were lucky enough to have the security of being on a base and we decided to make the most of our time there. 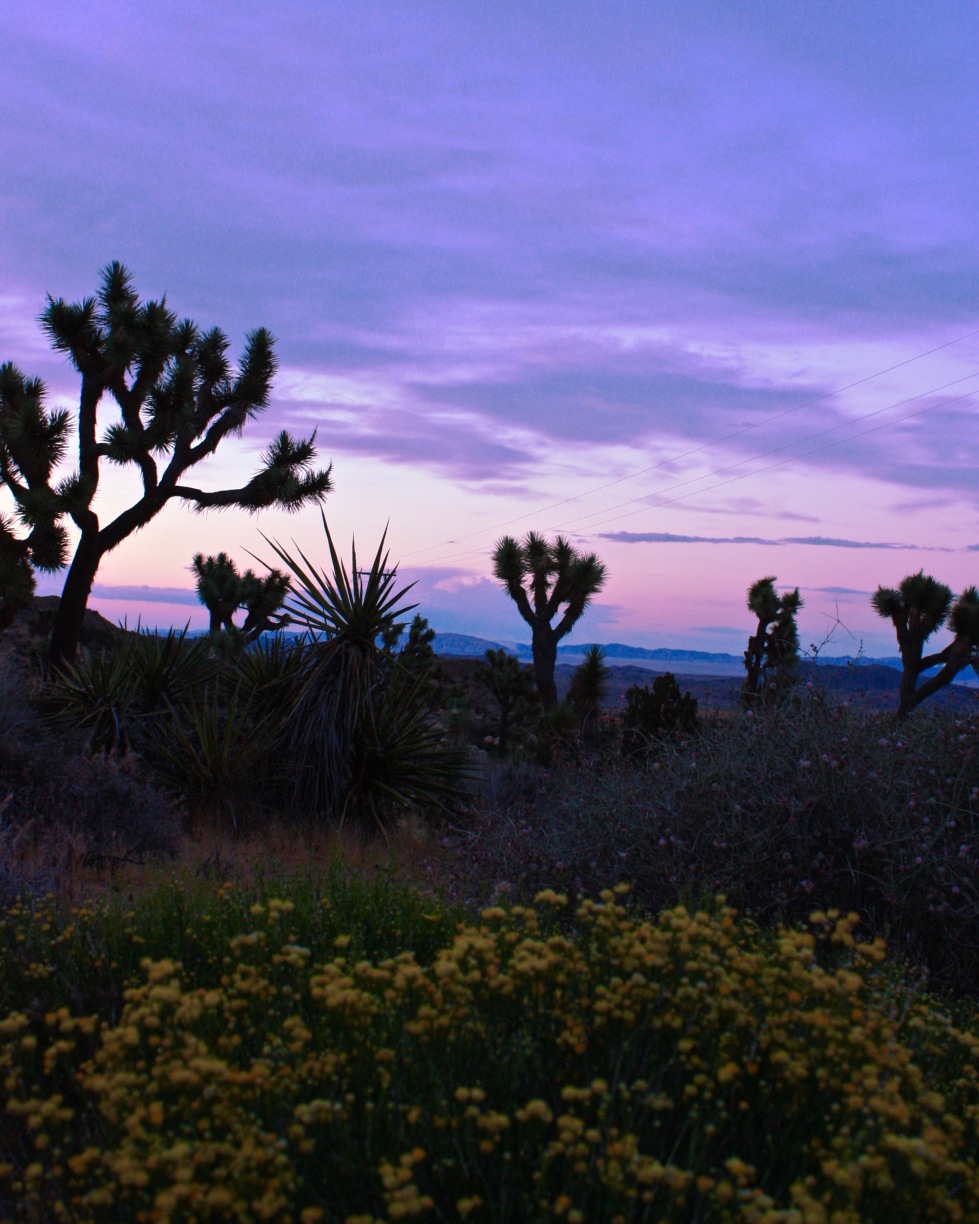 The first weekend we were there, we took off and went camping in Joshua Tree National Park for two nights. It was amazing. The first night we spent in the Colorado Desert on the south side of the park. With not a singe Joshua Tree in sight, we had a great time wandering the desert, hiking and exploring.

The second night was spent in Black Rock Canyon of the Northern part of Joshua Tree. It was a dense concentration of Joshua Trees and offered a lot of fun for the kids. In the park, we climbed the great granite boulders. The kids had no fear as they found small cracks within the rocks that kept them scaling higher and higher. I have never been afraid of heights, but watching my children ascend the rocks, I felt the fear of most people when they are out of their comfort zone. The kids are great being safe though and with our careful watch and guidance, we all made it back down without a scratch. The fear was certainly worth the views from the top! 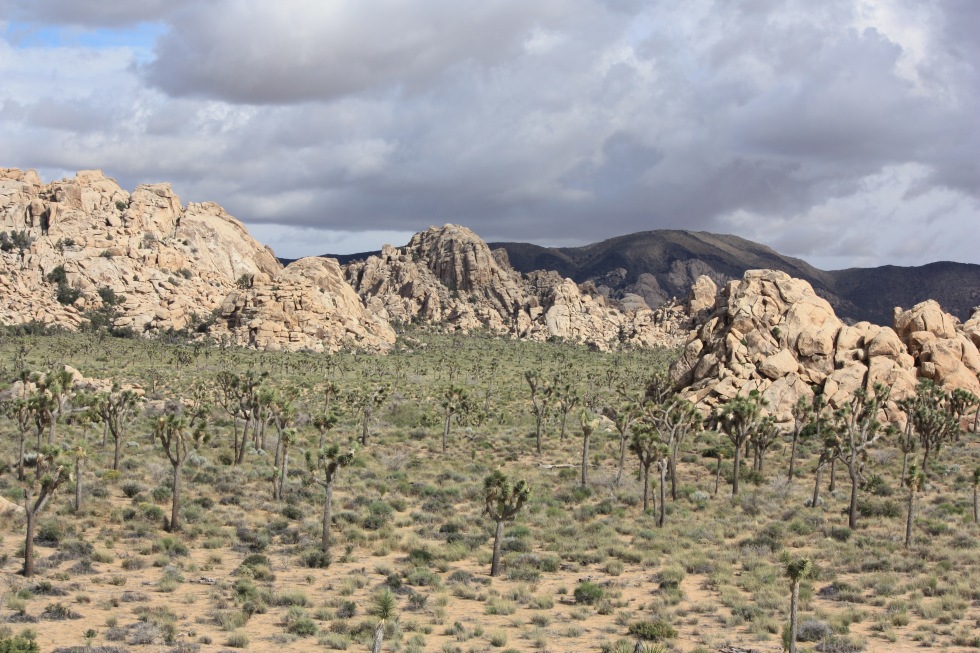 A few days later, Dan had a day off so we decided to go to Big Bear City for the day. The town is a ski resort town located on a big lake and is pretty much the ideal place to be if you like the outdoors. We drove up Big Bear Mountain and explored life above the clouds. Just miles away from the  Mojave Desert, the forest brought with it a new sense of life and purpose. The pines create a canopy that allows just enough light in to highlight soft wildflowers that speckle the ground. The needles create a soft blanket beneath the trees, causing sound to be absorbed and making the area perfectly calm and tranquil. Evelyn and I dropped the boys off at the top of the mountain to ride down on their bikes while we explored some more and drove down to meet them at the bottom. 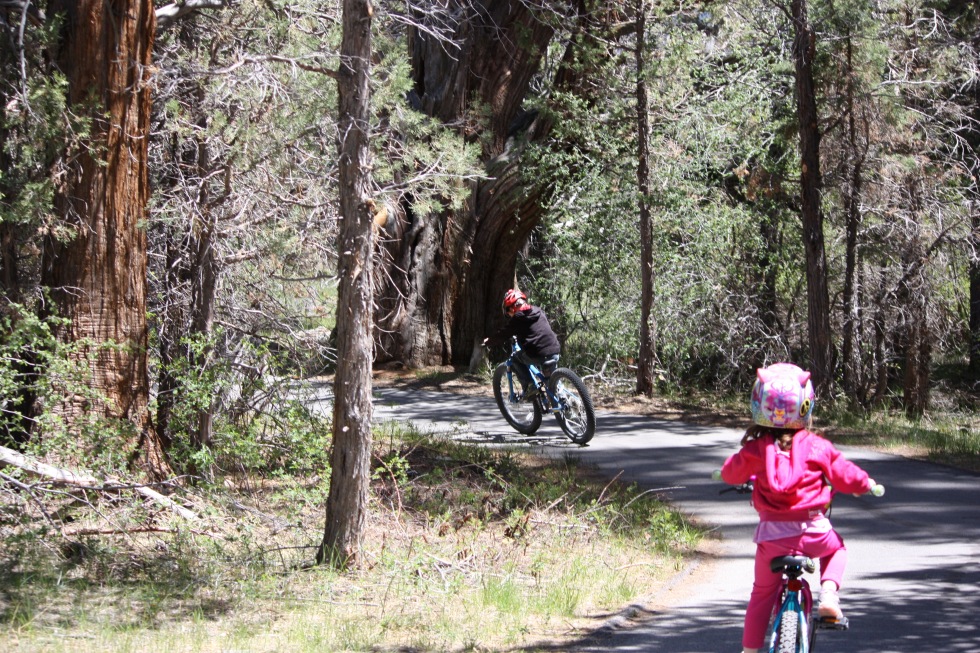 That weekend, we headed out to San Diego. I was fortunate to meet a couple amazing individuals from San Diego in Denver when I was training for my job with the VA and we have been in constant communication ever since. We spent the first night with Shannon and her husband Mike, catching up on life. Our other friend Abe, his wife Jane and daughter Lei came out that night and hung out making the night exciting and full of laughter. Being in the company of friends that were more like family instantly made being on the road feel not so foreign. The next couple of days we explored San Diego a little. We went to a dog beach on Ocean Beach (previous blog), and wandered. San Diego has terrible traffic and so many people so it can be quite overwhelming at times. However, watching the waves of the Pacific Ocean crash into the tall cliffs was refreshing and made me understand why so many people are willing to deal with the craziness of the city. Leaving was bittersweet since I feel as though there was so much more to explore and see. Also, I felt as though I was leaving my family again, even though I know it would not be the last time we see each other. I am still trying to talk them into buying an RV so we can all travel the country together.

When we got bak to Barstow, we immediately started planning out next trip out of the town. Big Bear City was so refreshing that it was no-brainer to go back and spend a full weekend there. We opted to camp to avoid having to pack up an RV and drive it up the mountain. Plus, camping offers a little more intimacy with nature and more adventure underneath the stars. We went on bike rides around the campsite, a hike along a mountain stream and built a squirrel house made of pinecones. Evelyn and I once again dropped the boys off at the top of the mountain for more intense biking while us girls enjoyed some ice cream shakes down in town. Just being there made the world feel small, calm, and peaceful. It is a place we will surely be back to visit.

Our last week in Barstow is best described as hot. The temperature was in the triple digits and the dust and wind made it almost unbearable. On Monday, I took the kids to Fort Irwin to escape the heat at the Army base’s splash pad and various parks. The base was a mini-oasis in the middle of the desert. The splash park was conveniently located right next to one of two Starbucks on base and the kids had a blast playing in the water and running around like crazy. On Tuesday we decided to make the RV look a little more like home by changing out some curtains and decorating the kids spaces with posters and stickers. The RV still looks quite bland, but it we are slowly making it our own and figuring out ways to modify it so it suits our needs better.

There was another family at the Marine base that we were staying at so the kids had three other kids their age to play with this entire time too. It was nice watching the kids all play together. They would run from RV to RV or hide off in the trees that line the park. Even on the hottest days, they would be out on their bikes or coloring with sidewalk chalk. They too were homeschooled so the kids instantly bonded. It also helped Alexander at times focus on his work so he could get back outside to play with his new friends. Leaving today was a bit sad knowing that they would most likely never see one another again, but we did exchange addresses so the kids can send postcards and maybe keep in touch.

We are currently on our way to June Lake in central California. As I sit here in the truck and reflect, I look out the window at an endless stretch of desert. A sign for Death Valley alerts me that we are a mere 121 miles away. Evelyn is fast asleep in the back while Alexander watches a movie on my Kindle. Barstow is in the rearview mirror. The past three weeks here have given us a taste of what life is like on the road, even if we were “stationed” in Barstow the entire time. It showed me that there is no excuse to just stay in and be miserable. There is beauty and adventure anywhere you go, even if you have to take a day trip to get there. I hope that I will never be back in Barstow again, but I am grateful that I was there and that I was able to experience Southern California these past few weeks.

I took this photo three years ago and have been in love with it ever since. What was a stormy day for some was a beautiful experience for me. The lake was serene. The air was cool. Everything was right in the world. #Idaho #idahodaily #visitidaho #perfection
Refusing to admit he is growing up. . . . . . #stayyoung #puppylove #growingupsucks #babybed #nevergrowup #labrador #dognap
Hoover Dam: one of man’s amazing accomplishments. Even in the heat, it was awesome walking across the Mike O’callaghan- Patt Tillman Memorial Bridge. #mikeocallaghanpattillmanmemorialbridge
Ready to roll...... tomorrow. Great watching some serious talent at the World Masters Jiu-Jitsu Tournament.
Vegas fountains at night. So beautiful!
Perfect morning to harvest veggies and enjoy the beauty nature has. I can’t imagine spending it any other way.
A little rain never stopped anyone from enjoying the lake. #lakelife #dogsofinstagram
Another beautiful day in a beautiful city. Boise is such an amazing place and the perfect place to call home.
Beautiful day in the mountains with the family. Lots of laughs, a few tadpoles, and a snake or two. I can’t get enough of this beautiful state. #Idahome
The kids had a great opportunity to meet one of their role models today! Thank you @caioterrabjj for coming to @jiujitsuboise . . . . . . #bjjlifestyle #bjjkids #wartribe @wartribegear #rolemodels #brazilianjuijitsu #growingupstrong #bjj #champion
Fortunate to show up to a Memorial Day class that was sparse due to the holiday. Alexander got some great training in with a great partner and had @mylifecubed coaching each step! 1% better each day @jiujitsuboise
21 seconds until an Americana! Evelyn the Exterminator is at it again in NOGI. . . . . . #nogi #jiujitsu #jiujitsugirls #toughgirls #nogikids #bjjnogi #northwestsubmissionchallenge #shemaybesmallbutsheisfierce #raisingtoughgirls #proudmama #firstplace
Alexander the annihilator.... second in a large division of 8 strong kids! So proud of him! Big thanks to @jiujitsuboise and the great coaches they have mentoring these kids: @mylifecubed @corycolt @kylehinkle09 @ddgy06 . . . . #jiujitsu #jiujitsukids #toughboys #jiujitsujourney @wartribegear #wartribegear #bjjlifestyle #toughkids #proudmama
Evelyn the Exterminator. 25 seconds and it is over! So proud of this little girl and how much she has improved and learned. Huge thanks to her great coaches @jiujitsuboise : @mylifecubed @corycolt @kylehinkle09 @ddgy06 . . . . #wartribegear #jiujitsu #jiujitsugirls #jiujitsujourney #bjjgirls #bjjkids @wartribegear #toughgirl #girlfights #rearnakedchoke #shemaybelittlebutsheisfierce
After over a year of hard work, dedication and resilience, these two amazing kids were promoted today to gray/white belt. I am so proud of their progress and am excited to see what the future has in store for them! thank you @jiujitsuboise . . . . #promotion #bjj #jiujitsukids @wartribegear #wartribegear #jiujitsufamily #bjjlifestyle #bjjkids #beltpromotion #hardwork #fitkids
One Gi. Two Gi. Three Gi. FREE Gi! Stoked to win a free rash guard and gi from @wartribegear! Phenomenal quality and awesome company! Thank you!!! 🙌🏻😍🙌🏻 . . . . #jiujitsu #jiujitsustyle #jiujitsufamily #rolltogethergrowtogether #bestchristmasever #oss #jiujitsugear #wartribe #wartribegear #newgi #jiujitsulife #bjj #bjjstyle
New training partners always welcomed. 🐶😂🤣 #jiujitsudog #jiujitsukids #guarddog #puppies #jiujitsu #jiujitsufamily @wartribegear #newgi #jiujitsulife
Oh Gi! That’s not quite how you do an ankle lock.... #jiujitsudog #jiujitsu #PupNamedGi #anklelock #sleepypuppy #wartribe @wartribegear @jayefosports
Little Gi really seems to be taking his name to heart. If only he knew how to tie his belt instead of sleeping with it! #jiujitsu #jiujitsudog #whitebeltbjj #yesInamedmydogGi #nogi #jiujitsuforlife
When you get a new puppy, name him Gi and bring him home, don’t be surprised if his favorite spot to be is on the grappling dummy. 😂🤣😂 #jiujitsu #ginogi #jiujitsudog @wartribegear @jayefosports #grappling #sleepingpuppy #firstday #gi #lovestocuddle

Begin typing your search above and press return to search. Press Esc to cancel.